Every revolutionary magazine needs a striking cover, and in January 1920, appeared The Brownies Book, one of the first Black African Children literature, “A Monthly Magazine For the Children of the Sun. Designed for All Children, But Especially For Ours.” When The Brownies’ Book first hit presses in 1920, stories for or about Black children were largely missing from the landscape of children’s literature. As the creators of The Brownies’ Book, including the scholar and visionary W.E.B. Du Bois, put it:

“All of the Negro child’s idealism, all his sense of the good, the great and the beautiful is associated with White people … He unconsciously gets the impression that the Negro has little chance to be great, heroic or beautiful. 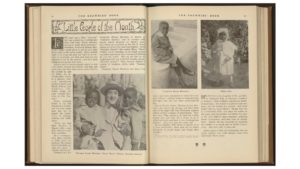 “The Brownies’ Book ran from just January 1920 to December 1921 before encountering financial difficulties and ceasing to publish, but it helped foster a much longer lasting sense of pride and self-identity in its young readers and played a key part in sparking the development of African-American children’s literature. The magazine was in many ways ahead of its time — and even our own, in which stories for Black children and by Black authors and illustrators continue to be underrepresented in children’s literature. But it was nonetheless an important and impactful effort.

“If you wait until you think society is ready, then strides would never be taken,” says Johnson-Feelings. “If you wait for everyone’s hearts to change, then nothing ever changes on a big scale. So big thinkers do their thing and hope that everyone else catches up.”

Du Bois claimed in his autobiography that The Brownies’ Book was one of the most satisfying efforts of his life.

Nov 1, 2018Leave a Comment on One of the first black children’s magazine started nearly 100 years agoHistory