Born in Foumbam around 1890, JohanesYerima alias Ibrahim Njoya (name obtained following his conversion to Islam in 1916), stood out at the beginning of the 20th century by making drawings on the sand, representing Sultan Njoya with Mama Kwandu, one of the king’s sons, later Nji Mama. The latter will introduce him to King Bamoun’s Palace where they will collaborate with Nji Fransawaya to create the famous Bamoun alphabet called Shu-mom. Which one was originally pictographic in that it drew a shape or figure to which a name was assigned. 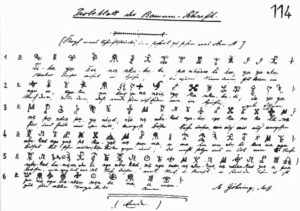 After having won the trust of the king’s son, Nji Mama, he will win the trust of the Father, Sultan Njoya. In 1908, he placed Ibrahim Njoya as a teacher at the Royal School « BamounSchule des HäuplingNdschoya[1] » in Foumbam, where he taught Shum-mom writing.

Meanwhile, Ibrahim Njoya continues to draw on paper. He draws portraits of the king, drawings of men, women and horses… 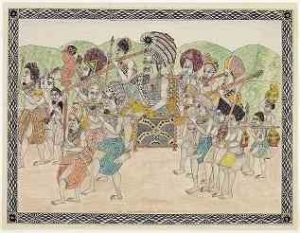 From 1925-1945, he multiplied his pencil and gouache drawings. He draws portraits of the Sultan, as well as scenes of hunting and fighting such as the one that opposed the Fulani riders to the Bamun warriors or the one of the Gbètngkom[2] war that led to the Islamization of the kingdom. 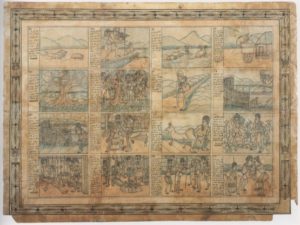 Beyond the battle scenes, he is also interested in dance rituals such as the « Nja » festival, known as the beauty festival, which marks the return of the dry season. He makes drawings and paintings inspired by traditional legends and that retrace the migration of the Bamoun people from Syria. 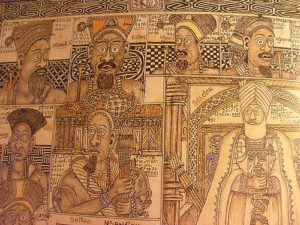 In 1932, he adapted two tales into comic-book-like forms: La Grenouille and Milan, Mofuka and Le Lion. However, Christophe Cassiau Haurie considers the Spleen and the four raccoons to be « undeniably the first Cameroonian comic strip« .

Ibrahim Njoya, an exceptional artist outside his time.

Unlike the contemporary artists of her generation who drew their inspiration from « the universe of beliefs and tradition », Njoya goes further. He chose to draw scenes representing the Memory of the Kingdom itself

With regard to his innovative approach[3] and artistic productions, Ibrahim Njoya stands out as a painter, memorialist, draughtsman exceptionally talented for his time and especially a key figure in Cameroon’s artistic history during the colonial period. He left an abundant work of sculptures, drawings, calligraphy, paintings that are intended to be the memory of an era and a society that has partly disappeared. He is certainly an important figure in the historiography of Cameroonian and African comics, an essential link between the first comic strip essays of the 1920s and those of the 1960s. 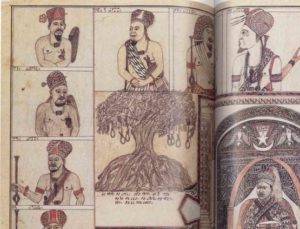 He is a figure whose style certainly deserves more attention than the one that has been devoted to him so far. Indeed, Ibrahim Njoya, like some contemporary cartoonists, cartoonists and illustrators, was quickly forgotten. This omission was accelerated by the absence of its main works of national cultural heritage. His paintings, drawings and sculptures are only visible in Europe, more particularly at the Ethnographic Museum in Geneva (Switzerland) and at the Bibliothèque nationale de France.

This indirectly raises the question of the repatriation of African cultural heritage to the former « colonies ». Ibrahim Njoya’s works are part of the collective memory of the Bamoun people. They are a source of inspiration, creation and recreation for Cameroonian and African youth. We can only congratulate Christophe Cassiau-Haurie who allowed us to discover this full-fledged herald of Cameroonian comics. Further proof of Ibrahim Njoya’s originality and impact, whose works have been able to defy fires and cross temporal and even geographical borders.

Some works by Ibrahim Njoya:

[1] The photographer Anna Rein-Wuhrmann drew a first portrait of Ibrahim Njoya during this period (1911-1915). This portrait is visible at the Protestant Mission Service in Basel (Germany).

[2]Gbètngkom is the name of the First Grand Officer of the Bamun Kingdom, whom Sultan Njoya had defeated after a battle, thus allowing him to remain in power.

[3] Unlike the artists of his time who worked essentially on the universe of beliefs and traditions.