From 02 to 11 August 2019, Christian Elongué, the founder of Muna Kalati, presented a paper on the (re)presentation and promotion of Cameroon’ Children and Young Adult Literature, at a pan-African event christened “Year of Africa Return and Trip Conference” (YORTC) at the Ghana Institute of Management and Public Administration.

Research findings revealed that the quality of writing, illustrating and publishing for children and young people in Africa is improving. There is a gap in culturally accurate children books for the Cameroonian Diaspora. There is a popular stereotype that, if you want to hide something from an African, you should put it in a book. And Nancy Schmidt’s book Children’s literature about Africa in English (1981), referred to African children’s literature as an “uncharted universe”. While much critical attention has been given to adult literature, African literature for children and young adults remains a neglected or marginalized sector. Children’s literature is not merely extension to some adult project and dedicated publishers of children’s books are emerging in various African countries.

Therefore, the paper presented the publishing situation, the representation and promotion of children’s books in Cameroon. He analysed the social, cultural, and literary contexts of the three phases of Cameroonian children’s literature. The second part of the paper analysed the educational and infrastructural factors that influence the promotion of children’s books by Cameroonian publishers: multilingual population, funding constraints, low literacy rated etc. It demonstrates how imported books are less effective because they were originally produced for a Western audience.

Elongué concluded with a prospective analysis on the economic and symbolic contribution of children’s books publishing and the new opportunities brought by the digital. It was a full week of debate, learning, commemoration, celebration, networking and heritage tours under the theme 400 Years of Memory and Belonging in Global Africa.

The presentation was acclaimed by the audience who also got introduced to Muna Kalati, and its work in the promotion of Children’s books. Many engaged to support Muna Kalati via book donations and writings contributions. Most of the other presentations of the conference demonstrated the rich historical connections between Ghana and the African Diaspora, promoted African heritage and culture and its important role in development.

The YORTC was organized in the context of the ‘The Year of Return’, which is the 400th anniversary of the first ships of enslaved African people landing in North America in 1619 and invites the African Diaspora back home. The symbol of this YoR is the “Sankofa”, a bird, feet facing forward and head reaching backward, often to pick up an egg. In Twi, the language of the Akan people in Ghana, the word ‘Sankofa’ literally means ‘go back and get it.’ The symbol teaches you that you can only move forward if you examine the past, learn from it and act.  The meaning is quite deep because it counsels us as humans that we may make mistakes, but all is not lost.  Through learning from our mistakes, we can go back and recover what was lost. In our case you could say we’re recovering the value of unity amongst our dispersed diaspora.

It’s necessary to “bring awareness to the importance of learning from our history in order to move forward and develop healthy and prosperous societies.”  Said Ambassador Johanna Odonkor Svanikier, founder of the ‘Heritage and Cultural Society of Africa’ (HACSA), an organization founded to “create awareness about the importance of heritage and culture for global economic development, progress and security.”

The YORTC was co-chaired by Lisa Aubrey, Associate Professor African and African American Studies at  Arizona State University and author of  In Search of Bimbia: Transatlantic Slavery and African Diasporan Rememory in Cameroon; and George Agbango of the University of Ghana. Lisa Aubrey said the conference has the ambition of changing the prevailing narrative on Africa, reuniting the African Diaspora and putting them to work for the benefit of their communities and the entire continent. She hopes that participants will surely look back to it for inspiration and motivation as they move forwards. 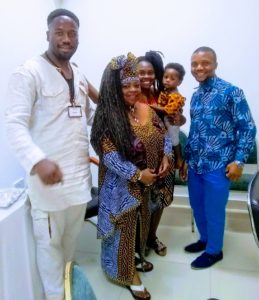 Oct 9, 2019Leave a Comment on Muna Kalati represented at the Sankofa Year of Africa Return and Trip ConferenceReport